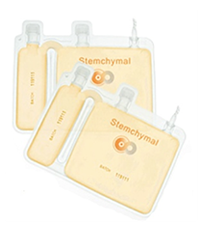 Stemchymal® for the treatment of PolyQ Spinocerebellar Ataxia (SCA)

SCAs are rare neurodegenerative diseases that cause progressive difficulty with coordination. In general, the prevalence of SCA is about  2~7/100,000. There are more than 30 subtypes of SCA that involve the cerebellum (in particular Purkinje cells), brainstem, and other non-spinocerebellar tissues.  Each subtype of SCA is caused by a mutation of a different gene. PolyQ SCAs including SCA1, SCA2, SCA3, SCA6, SCA7 and SCA17 are caused by an extensive CAG sequence repeat which encodes for expanded polyQ residues within the mutated protein. All polyQ SCAs patients clinically present limb and gait ataxia because the same ataxia interactome is shared among these different sub-groups. The age of onset associated with SCA disease patients can range from twenty years old to fifty years of age. In addition to being a life-threatening disease for the patient, the patient’s handicap and dependency during the extended disease course also put a heavy burden on the patient’s family and healthcare providers.

Unfortunately, no curative therapy has been approved which can delay or halt the progression of SCAs. Currently, there are only therapies approved for SCAs which provide supportive, palliative treatment in relieving or reducing the frequency and severity of symptoms.  Physical therapy to ameliorate gait dysfunction and speech therapy for patients with dysarthria are also essential supportive treatments.

Steminent has completed a phase I/II clinical trial with Stemchymal® for the treatment of SCA. Stemchymal® is a formulation of stem cells isolated and cultured with Steminent’s technology platform from human adipose tissue. Evidence of Stemchymal® safety was generated in this trial with no biological-related adverse events observed in the 12-month follow up. Moreover, evidence of potential efficacy was observed in the preliminary Phase I/II data from two efficacy  assessments:  Scale for the Assessment and Rating of Ataxia (SARA) and the Sensory Orientation Test (SOT).  Sixty-six percent of the subjects showed improvement in both the SARA score and the SOT score in the first month following a single infusion of Stemchymal®.  These measured functional improvements were maintained in study subjects for up to 6 months.

In December 2015, Steminent received US FDA Orphan Drug Designation for Stemchymal® in the treatment of PolyQ SCAs. The US FDA’s Orphan Drug Designation program provides orphan status to drugs and biologics intended for both safe and effective treatment of rare indications that affect fewer than 200,000 people in the U.S. The granted designation also allows Steminent to enjoy a 7-year market exclusivity upon approval of Stemchymal® and other development incentives including tax credits for clinical research costs and Prescription Drug User Fee Act (PDUFA) fee exemption.

To further investigate the safety and efficacy of Stemchymal® for the treatment of SCAs, Steminent is currently conducting a randomized, double-blind/placebo-controlled phase II clinical trial (NCT02540655).